May this be an opening, a revolution of the Sandoval
CD-Rom slowed to one cycle per second
A see thru discovery that is yet to appear before Coronado’s eyes
that slows down into myth of the rocking Corn Maiden, yes!
A stirring of Zia Santa Ana Corrales Tejon San Felipe
the Old Placitas in a dust-devil vision of the now in
the now on the side of the Mercantile a twister
carrying on into the night
drink up read poetry at the Wine Festival
and the he & she of the words of art creations are on velvet of silver & iron
tortillas of gospels of the new post-multi-sequential
post-big bang theory realized in Buddhist actuality
of now, what lovers on
the sides of the mercantile walk in
flowers of graces towards the front doors.
We have vacated the land of too many people &
the land can come back again to lead instead of follow
lead Earth instead of follow, vitamin pills
of the future contain dirt &
getting our hands back down into the orchids we grow
again
the everything we did we did again
affordable housing & affordable
people again
The he & she of the new presence never ignored again
rocking/walking in the doors and off the walls
forever,
into the room of the computer garden turned back into earth
I am you & he & she
stepping down the ladder of the economy
back into the helping older community
who are we to deface
all that came before us?
Who are we to change
the rock art of all that came so slow before
purposeful steady & alert & possibly fast
dancing flute players with rock hard
hardons &
soft mounds of the oceans & mountains of breasts
in the corn/oats/all-vegetables especially tomatoes
& chile & butternut squash maidens just
our wives our husbands
all our children deserve a flowering of the arts
that interject reality with the fantasy of truth. 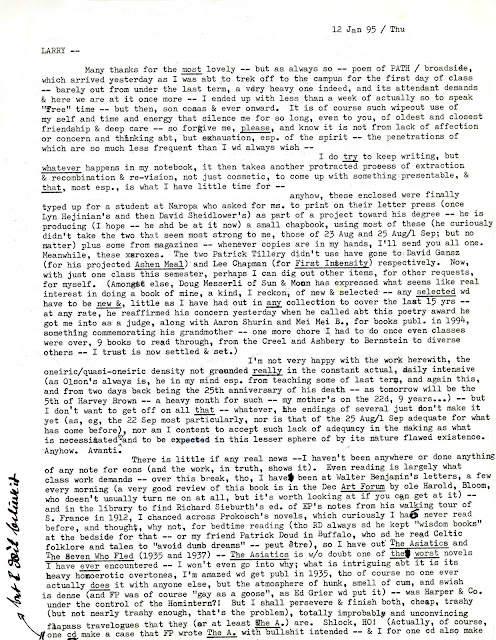 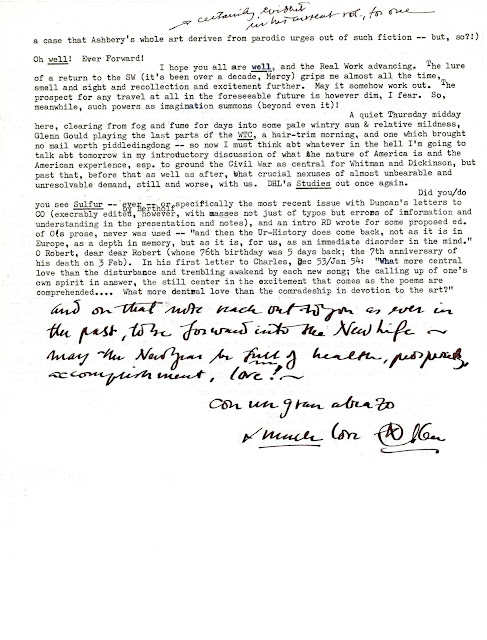 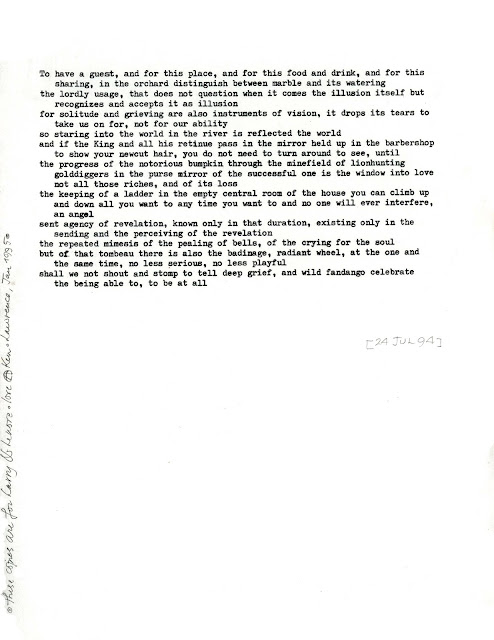 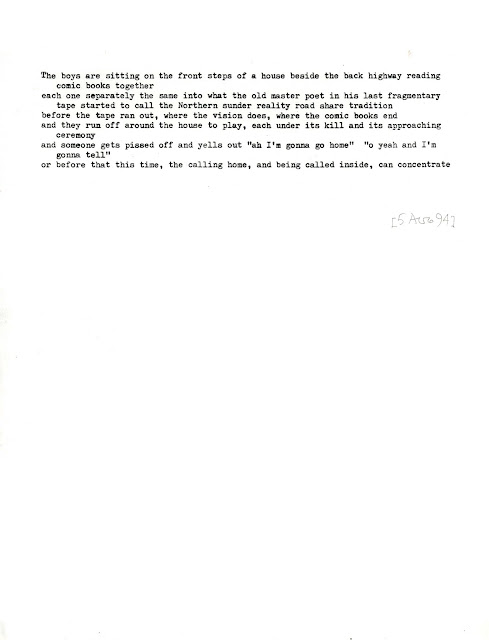 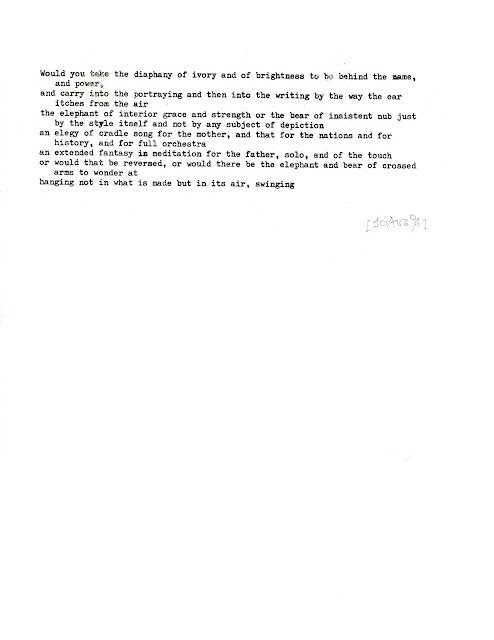 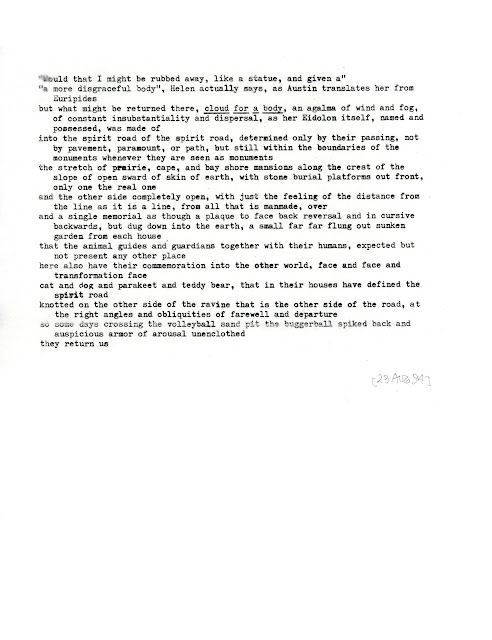 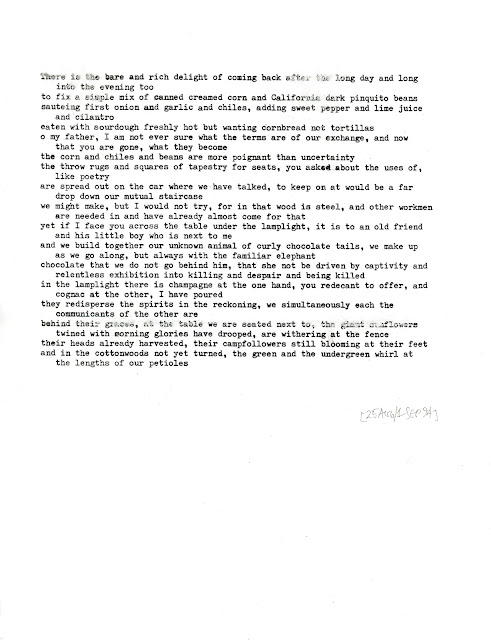 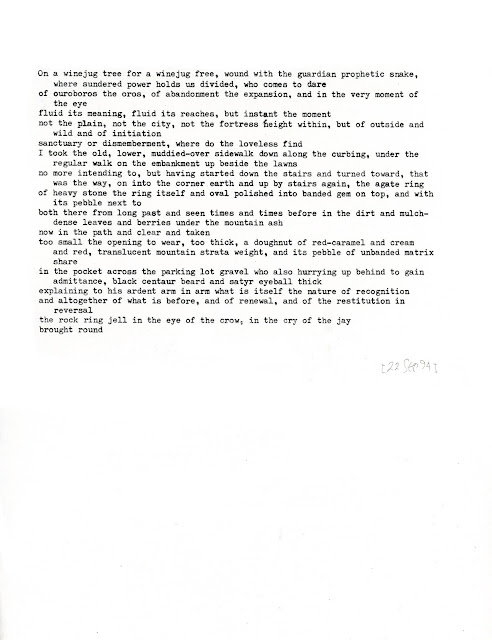 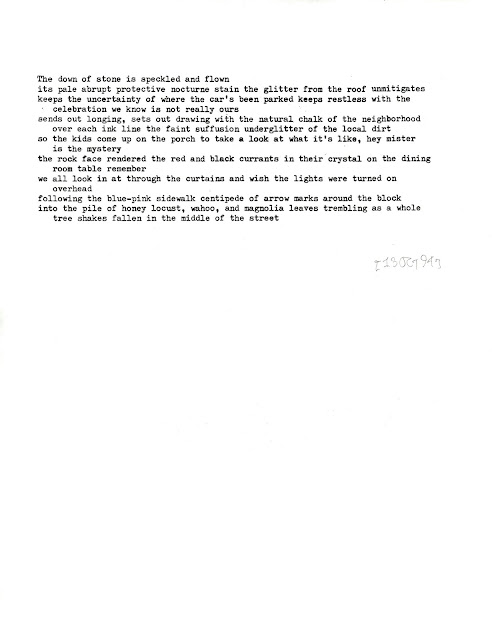 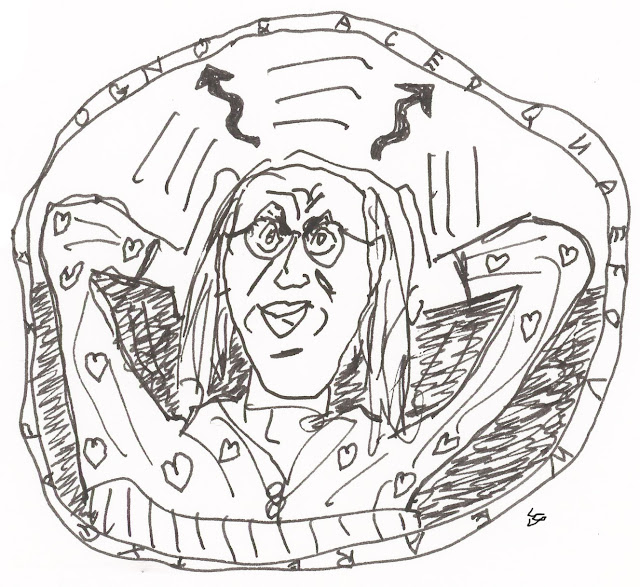 Did you get my last letter. I guess it was a bit long for email. I miss the letters I used to get and their prompting the letters I used to write. Somehow email shortens everything and hides it away. When I don’t get letters I don’t get the inward mobility of soul. In fact the soul can only be revealed in personal penning. At least in my stationary world it’s the only evidence I get of a soul. That personal writing to me, handwritten or typed, immediately opens up a presence which contains more than itself. That direct focused involvement, with me involved, can only be a joy, a renewing, an expansion of his or her intellect with mine, the ongoing revelation and opening of self that can even be more personal than sitting next to each other and talking. Talking is like sports. You can do it walking, or even running as well as sitting or standing. It’s delicious in its own right. It’s batting the ball back and forth, or tossing the ball. It can be accumulative and lead to a win but usually not, it’s a tied game and everyone goes home satisfied, unlike real sports. But in a letter written and sent in the US mail there’s not banter, there’s an expression of depth. True you can get involved with writing writing but you will come back to the focus on who you are addressing. The immediacy of now commands the tone. There’s a filling in of spaces of shared friendship. An amplification of a relationship possible in a letter. The friendly letter. The expression of where the mind has been and where it is, what reading, what books, what findings, what reflections, what pains what relationships, what anguish what loves, what travels what goings on, what elements of life. It’s the best way to keep alive a friendship when there’s distance. It defies distance and renews everything again. Or that’s what I’ve experienced and that’s been a major component of my life. But time goes by and technological hazards reveal themselves in the frenzy of change. The instant secretive aspect of the computer, the chip in phone and tablet, rushes us to complete things quickly and get on with other things. So I guess I let the old idea of letter invade the digital premises of email and let myself go a bit as if I was writing a letter. I went on more than the usual email snippet limit. So if you got my last email I’d like to hear back from you, however short. That’s the demand of the technology it seems, leaving me at least with the nostalgia of the former days of writing and sending, waiting and receiving, and after awhile, sending back in the mail sincerely or best wishes or abrazos or with love, Larry.

The Lodestar Broadsides, 1974, Editors: John Moulder, Marc Campbell and John Gierach, Printed by letter press at Lodestar Press in Boulder, Colorado * This is number 35 of an editon of 150 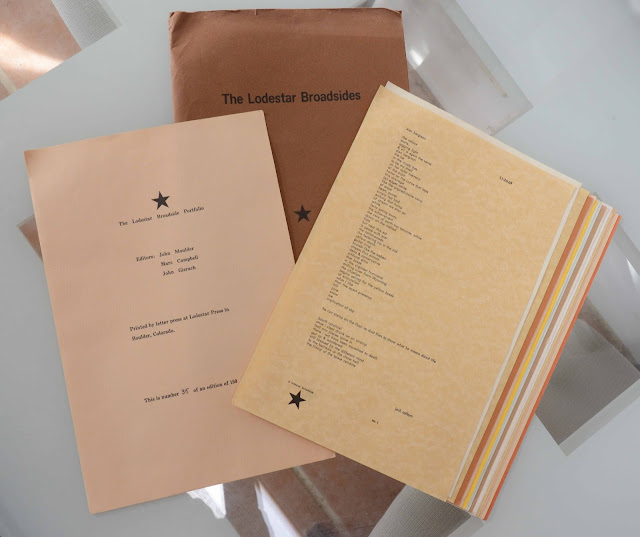 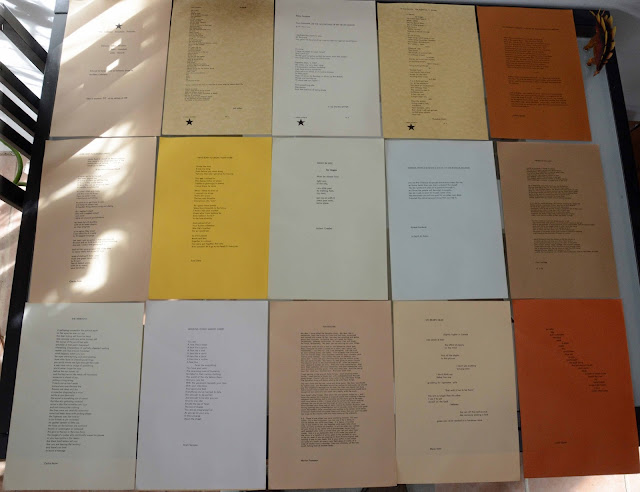 Posted by Larry Goodell at 2:24 PM No comments: