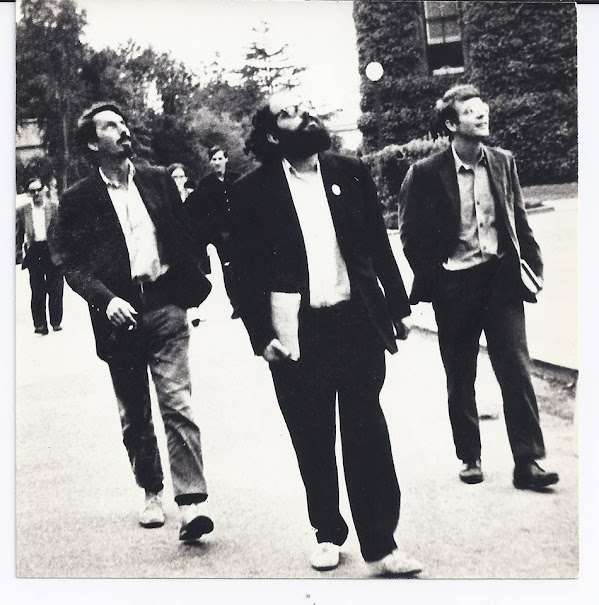 [Submitted to Larry Goodell for Fervent Valley #5 or was it #6 which, whichever, never got published. It is my thrill to present Mr. Braes' work here, finally, with my apologies to be so late to do so. And I do this in loving memory of Afton who could not have created these spectacular takes without dear near lifelong friend Stephen Rodefer. Love to all in this disclosure. Larry Goodell 24th of April 2022]

"Shocks #3 will present a ‘Gary Snyder Dream Sequence.’ If you have had a particular dream about Gary Snyder that you think says something about the poet, his work, and/or your relationship to him and his work, please send it to us. We'd like to build a public gestalt of dreams as a way of realizing the 'consciousness' created by his personality and his work."

I dreamt Gary Snyder ate a pregnant lizard in the Pinacate Desert but it was all right because:

(1) He was truly hungry; (2) He killed her with his bare hands; (3) He left the eagle feather he usually wore in his pony tail hanging on a cactus as his recognition of the force of Lizard in the universe.

I dreamt I went to a Gary Snyder reading in my Earth Shoes and in the first poem when he said “deer,” we were all thrilled to be part of the incredible magic of prime-poetry. In the next poem the fourth word was "fir" and everyone had an orgasm.

I dreamt I looked down and my Earth Shoes were gone and I looked around at the audience and everyone looked so hairy and ecological that I felt like a marine and was ashamed.

I dreamt Gary Snyder kept us waiting in line to pee at the party afterward while he fucked yet another Gary Snyder groupie in the house's only bathroom. The water was running full blast.

I dreamt all the definite and indefinite articles of northern California and Oregon brought a class-action suit against Gary Snyder for not being an equal-opportunities employer and in settlement won his house in the Sierras and sold it and with the money bought an Air Stream trailer and went to Yosemite to camp on the Fourth of July.

I dreamt Gary Snyder was the first centerfold in the Sierra Club Bulletin and they flew in Elliot Porter by helicopter from the Grand Canyon to touch up the photo.

I dreamt I heard Charles Olson say Gary Snyder that inventory of the mundane.

I dreamt Gary Snyder went to Japan because he wanted to be tall.

I dreamt Gary Snyder wrote a poem that wanted to be liked even more.

I dreamt Gary Snyder believed in the magic of animals, the common work of the tribe, and the ecstasy of the dance.

"Let's begin at the beginning. Are you circumcised, Bob?"

"Well, my father practiced medicine in Arlington, Mass., and my mother was a Welsh cupboard so on that particular level it made for a not altogether unlovely beginning. At a relatively early moment (i.e. I was just a kid) I lost my eye to a crow in the backyard; then, not absurdly, Harvard; then, the war. It was a curiously indecisive period in what otherwise might have remained, simply by nature, an inarticulate youth."

"When did you first realize, Bob, that you were Emily Dickinson reincarnated?"

"Now that's a very flattering question. (Laughter) No really, if only I could so likely think of myself. I do remember once having the misfortune of living at some length (i.e. we were married) with a woman who, like they say, wouldn't go down on me. And this, again not absurdly, gave a curious, halting form to much of what I wrote at the time.”

"The robin hopping after the disappearing night crawler reaction?"

"Is this when Charlie Parker entered your life?"

“No, this was later. I had tried to come down to New York, bringing some of my best Bantams. Some friends, John and Joanne Tewkesbury were kind enough to offer me their house on Long Island for the summer.”

(Editor's note: here the tape runs out; what follows is a long and interesting discussion, unfortunately unrecorded, of John Cage, Merce Cunningham, and Thomas Campion, while the tape is being changed.)

"Does Bobbie continue to make all things possible, Bob?"

"Every woman continues to make all things, and each particular remark clearly particularizing itself in its own time. I remember once the English explorer, Shackleford I think it was, describing a particular snow cliff he had stood on years before in Antarctica I believe, and the sense he had looking out over all that ice and snow which he literally was familiar with."

"No, not absurdly, again . . . that particular story manifests a curious sense of things, not altogether unrealized, which I have always felt made actual what otherwise might become merely memory, and that's a comfort."

"Well, Ukiah curiously is a possibility. Not heavily, but one hears of course that that particular town literally is haiku spelled backwards, and that's a modesty I feel particularly compelled by. And there's a pleasant little community college there. I mean what can I say. At Bolinas there's a wonderful friend, the sculptor Dostoaki Brown, a very lovely man indeed, who happens also to be the local kite flying champion; well, nothing need really follow, if that can sound right. I mean it does anyway. And the perils of living, as well as the glory of it, become altogether consuming. It's not an easy thing to know anything exactly. But then one does know everything. All wise. The water board moves in mysterious ways. But I like the act of surfers flopping along the street. That curious grace of the wetsuit out of the water.

Your Veins Are Using Up The Redness Of The World

Your plural lovers suffer their attacks of pleurisy
Sitting helplessly on the toilet of your attractiveness
With the door totally off its hinges.

I tell you with your essential underthings
And my idea of justice we could conquer the world
Were it not for such rudimentary stoppages as time,
Periodicity, hunger, and the need for making a living.

Quick, one last stab! and then let's call it all off
And go up north for awhile, exuding sex
And basking in the sun of some slimy warm spring.

And if you cannot love me it hardly matters finally.
At least we can go on a trip somewhere –
It's all madness anyway and I don't think
Any of us were meant for endurance
Else why would our tennis shoes wear out so gracelessly.

If it tastes good I say eat it.
If it kills you at least you die
Trying not to.

Into the anus of the other the cock nudges
like a green thumb.
Patience overcomes cowardice and slowly
the sphincter opens like a petaled leicaflex
and the relaxation spreads over the general surroundings.

Some cows nuzzle down devotedly
against a tree trunk
and be the same stream without interruption
a long haired pointer is stalking dragonflies.

The more one bears
the more fecund one becomes,
moving toward that sudden and wonderful appointment
to which flowers all that remains
behind.

It is a beautiful afternoon in September, the air
has a carnival, harvest atmosphere,
Frank's dead in heaven and everything is right
here on earth.

[I am beholden to a near lifelong friendship with Mr. Braes and all his disguises. May our wonderful collaborations (Oriental Blue Streak, Fervent Valley, and Duende Press) continue to spirit the world.

[Note: contact me for any comments, questions, hesitations.] @larrynewmex or larrynewmex@gmail.com

Posted by 3 dimensional poetry at 9:36 PM No comments:

HOW I PUT TOGETHER THE EARTH AND THE MOON 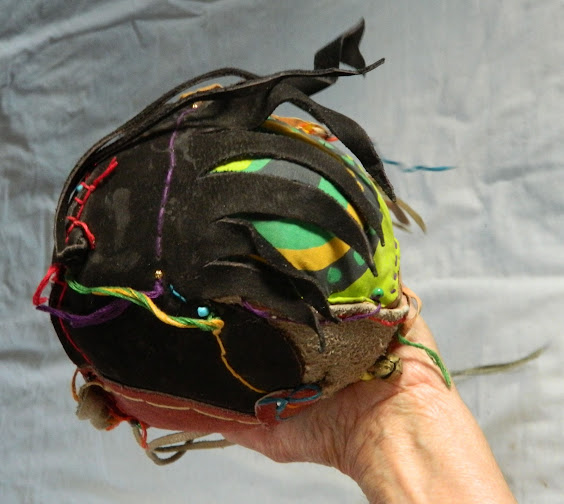 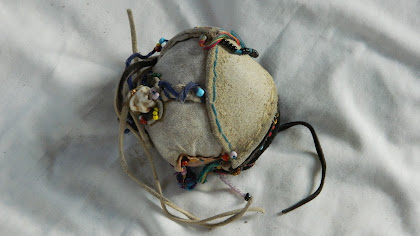 Originally I used a globe-world I found in Gen. Kenner Hertford’s study, and a golf ball for the Moon. Then I thought I’d make it out of wood, a rough-hewn wooden ball – then, with all these leather scraps I got from Steve Katona, started cutting them & sewing pieces together with embroidery thread . DMC-25 of Ann Quin & Lenore & my peyote messages day. I filled the “Earth” with dirt from around Peyote Rock.* I went all around getting plants, dirt, rocks –  filling it. Infinite regression – am I God creating the “Earth”?

16th and 17th – I worked on the “Moon “– Moon in Aquarius (where mine is) & then Pisces. Went to the pyramid-mountain in back of the house, this became the Pyramid of the Moon. Took many pebbles to fill the Moon. Plants. Painted much of it with white watercolor. Seeds, little ant pebbles, lichens, dirt, dead branches, an almond, abalone shell with MOON written on it, licorice root, ginger, etc.

SUN:(in the FOOL performance is) the dragon candle holder (which was the gift of Robert White & friend).

EARTH: damp dirt from the sacred spring (Ojo del Orno on property), topsoil & twigs around the old grape vines, topsoil around the far out apricot tree where, tied around the trunk I found a church program – the 4 gospel writers, tore off a piece of the program and pushed it into the center of the “Earth.” Dirt from the meeting of two tiny runoffs. Chamisa, apricot seeds, juniper berries, piñon needles. Dirt from around cane chollas, dirt & small pebbles from Peyote Rock – all around there, innermost recesses under the rocks, etc. Dirt from around the (huge) cottonwood tree in the arroyo. Leaves from around the prayer stones on the West side of the arroyo. Followed the arroyo up towards the old shelter cliff. Many things from the arroyo where a steep arroyo met it. Both feminine? & I masculine?

Before closing it up.

Today (Tues) – opened up “Earth” & put in dirt/pebbles from around the apricot tree where Jeff Sheppard & I discovered the miracle of fruit blossoms!!! “Earth” needed some tightening up, some tightening of overall sag & stiches etc.

* Peyote Rock was a large rock promentary right outside my back door from which the view of the distant Rio Grande valley and volcanic mesas was extraordinary. Of course the General and his wife Annie (for whom I was caretaker of their place) who were heavy Vodka drinkers, called it Cocktail Rock. But we re-christened it.

Posted by 3 dimensional poetry at 11:40 AM No comments: