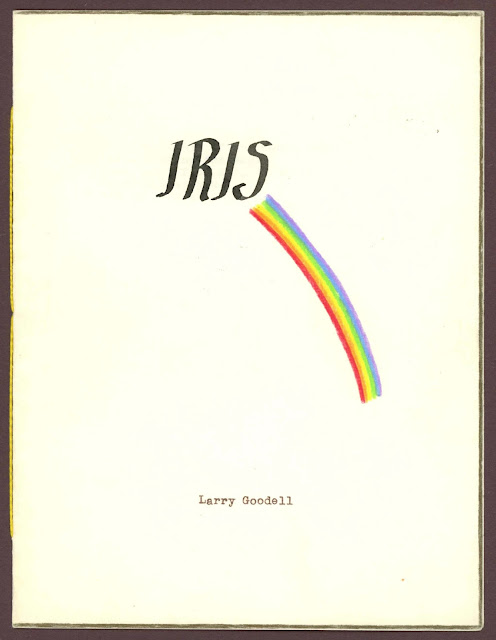 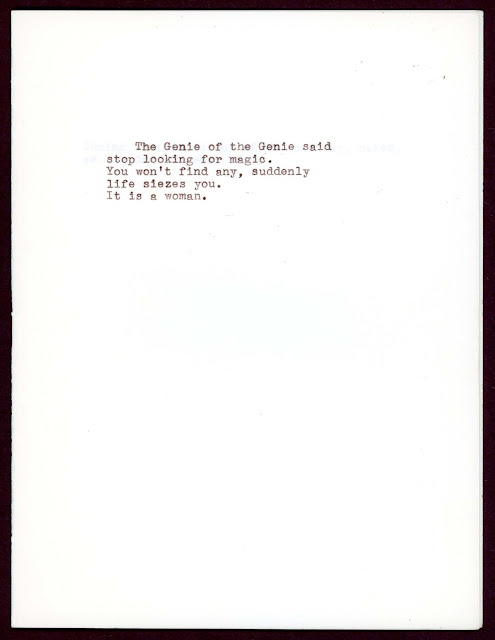 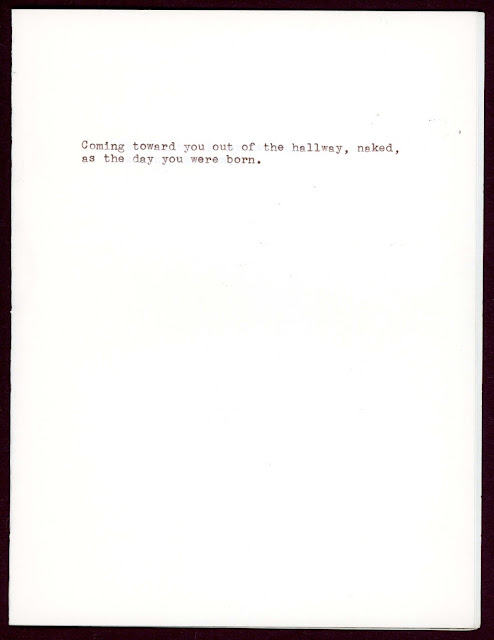 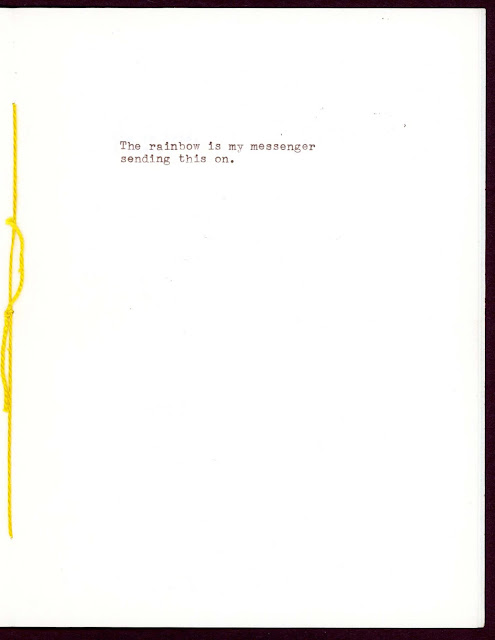 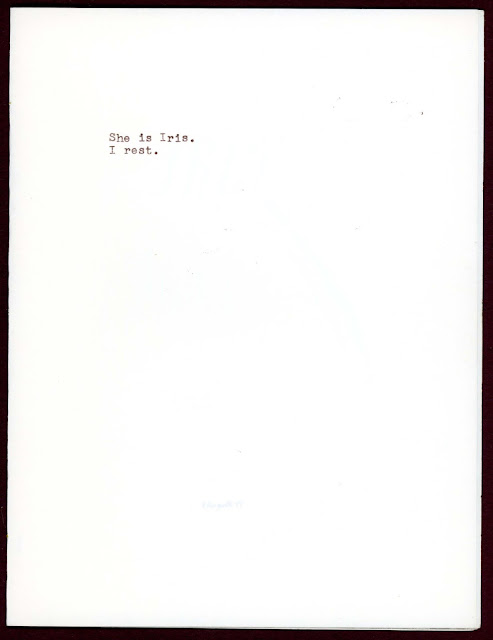 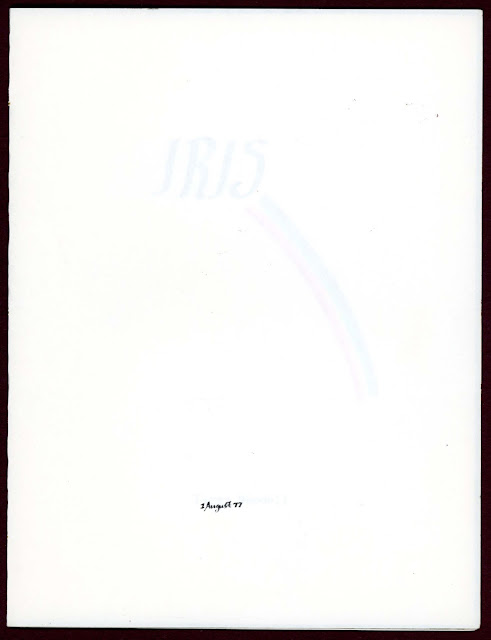 This little booklet, hand sewn with yellow thread and cover bordered in gold pencil, came from early August of 1977, year of the NYC 25 hour blackout, Jimmy Carter pardoning the Viet Nam draft dodgers and announcing we must do something to counteract our massive oil consumption, and the year the World Trade Center was finished . . .  larry goodell

The following poem, also for the goddess Iris (and her equivalents), is read left to right first line, right to left second line and on back and forth. The arrows will clue you which lines are to be read backwards. You can see it also in this parcel of broadsides from the 70's: 6 Broadsides from the 70's from duende press


"I prefer the unknown."
Jack Spicer

Iris I cant find out anything about you but I love you and am yr wings
out fish I all is gods the of messenger intertwine we and mine are you or
of this cavern. I prefer to be alone & with you lightly bearing the snake stick
hair of flowers the off headband the kissing other each up & around coil we
falling down I pick up and fall down in you touch air which is yr purity
race up light up lit particles out burst speckled rainbow the of rain
the sky to the other end of the world together forever doing good to each other
soft count that ways little the ,way the pointing goods delivering
in yr soft hair I love you till the rainbow plunges in dark count of
.together cave the into us forcing us against down bearing rocket the 
There is no other way but the way of the unknown as you came to me
hair and face my washing morning the in up sun prism the from blinding
and lift to do the day, that way I know. "You do your poems!" someone
tickling earth of ends the as true ,friend a was it and me at shouted
between the toes where shallow rivulets fall down between me and the nearest friend
intertwine we and fly and direct but ask not do dear true only my you
vines up each other to the bloom of the first sunflower turning red to attract the hummingbirds
up me holding ,voice no ,earth no ,spaceless being ways our in set are we
the airy innards spilled out in the lay of love, the old singer’s voice
around dancing and alone other each on back splashing ,cracking ,clacking
counterclockwise on toes tipping up and off the earth forever.


this is a duende press tattered old manuscript broadside was resurrected february 2006 as part of 6 Broadsides from the 70's using Issuu & Scribd. larry Goodell
Posted by Larry Goodell at 3:49 PM No comments: 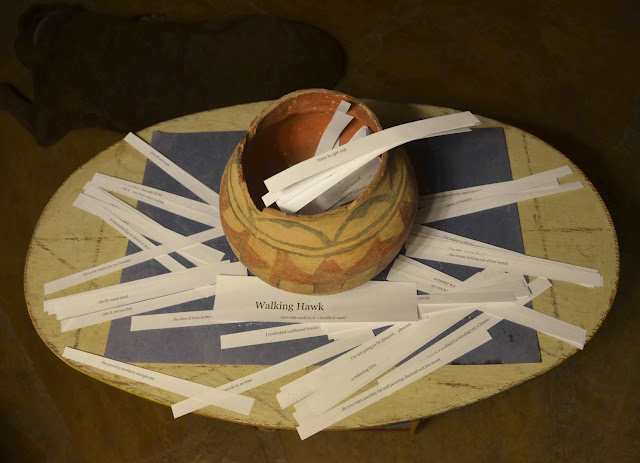 pot with poem in it -
mix up strips (lines) and read

. long hair is a scaffold for blowing out yr brains

. they want the most violent image to tear their tissue paper

. revolution is a dragass minority in rear

. it defeats the purpose not to be named

. it pops into yr head

. do you want another he said pouring charcoal out the sewer

. nematode is no toes

. a heap of Sundays

. going out on Sunday

. a jack in time multiplies the dime

. what you can’t reach on Monday

. it’s terrifying what language does to him

. language to put in a pot

. a make to brace

. a challenge for Europe

. I’ll never make you on Tuesday

. I am out on Tuesday

. tie it all together with a mop & sop

. how many wafers do you have in yr corn

. in each case there was a case to shake

. other than that it was stone pussy

. that is    your ferris wheel rocking

. sugar towards   Christian hippies   knock them off

. a meeting on Sundays

. time to get out

. I never slept with you

. a jacket on Tuesday

. a meeting on Tuesdays

. a hanging cob justifies the brain

. his peter was up higher than his salary

. I’m going to fill this soap notebook up

. where it’s at was where it rot

. pick it up & lay it down along the pot

. she comes itching out of her period

. periodicity is a dish for a period

. get up & ejaculate the dawn

. a rooster is a quick pulling hen

. playing with the trucks

. he done fuck himself with rapid cleanser

. a solid formation on the cup

. he cd hear the fly buzzing after it was dead

. take it out on time

. the precious nowhere escapes me

. the face of Cain is the ass of Able

. are you able Tuesday

. Aaron is Monday     Tuesday is Sunday

. all school functions are decrepit

. a school is a walking hawk

. the hawk that walks

. he realized he cd go on forever so he stopped

– shuffle & read." For now printing the poem double or triple spaced and then cutting each line out with a paper trimmer works fine. The pot I'm using here I unearthed out on Rio Grande Blvd. in North Valley of Albuquerque when I was living there & teaching at the Academy For Boys (Albuquerque Academy). . .

Notebook #14, back cover. I had finished the "Staff" a poetry performance piece and/or serial poem, and herein started on the "Bowl of Ometeotl" . . . . 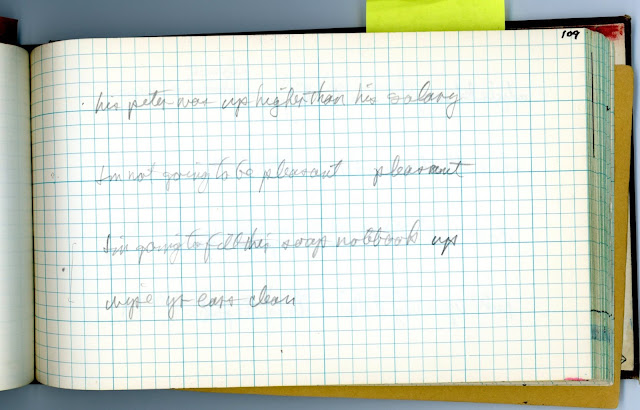 a page from "Walking Hawk" which is also in this NB.

I find it interesting to look at the full-blown original writings of a poem (any poet's poem), the notebook, the papers, the surroundings, the time and place, the "3 dimensionality" of the poem in specifics . . . to get a sense of the context and gift-offering of the poem . . .

love to all,
larry

Posted by Larry Goodell at 10:39 PM No comments: